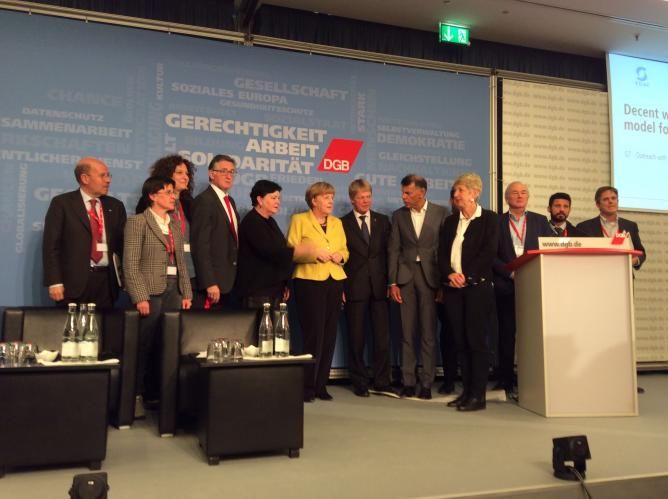 Last week Gail Cartmail, TUC International Development Spokesperson and Assistant General Secretary at Unite joined unions from G7 countries at a meeting in Berlin organised by the German government as part of its G7 Presidency, in association with the German union centre the DGB on the theme of ‘Decent work worldwide - a business model for the future?’

The meeting featured representatives of the OECD, business and government with a keynote speech and panel discussion with German Chancellor Angela Merkel.

The German government has put decent work in global supply chains on the agenda of the meeting of G7 countries - Canada, France, Germany, Italy, Japan, UK and USA -  which will take place in Bavaria in June.  It will also be discussed by the meeting of G7 labour ministers in October.  Last week's meeting in Berlin gave trade unions a chance to input on the commitments we would like to see made by G7 country governments to uphold labour rights in global supply chains.

In her speech, Chancellor Merkel said:

She added that developing stronger measures on transparency, prevention and supporting workers to enforce rights through trade unions should be the focus of G7 discussions this year and subsequent G7 and G20 meetings.

Before the G7 meets, the second anniversary of the Rana Plaza factory collapse will take place on April 24th. Unions at the meeting put their concerns directly to Merkel that $9 million in compensation is still owed to the workers of Rana Plaza and their families.

Phil Jennings, General Secretary of UNI-Global, the global union representing retail workers, spoke of how shameful it was that some companies that make billions from clothing made in Bangladesh still hadn’t paid into the fund, or had contributed only a small amount.

Merkel said it was inexplicable and ‘embarrassing’ that companies hadn’t paid into the fund almost two years after the collapse. She said ‘if I was a company owner, I would have paid in’.  Reiner Hoffman, DGB President, Sharan Burrow, ITUC General Secretary and Phil Jennings pressed her to use the G7 to call for the funding gap to be closed.

This would connect with the initiative launched by the German labour  and international development ministries for G7 countries to create a ‘Vision Zero’ fund to which multinational companies in their countries would be encouraged to pay into.  This fund would provide a source of welfare funds for victims of future industrial disasters.

Unions at the meeting welcomed the proposals for the ‘Vision Zero’ fund as it sends an important signal that, as laid out in the OECD guidelines for Multinational Enterprises, companies have clear responsibilities to workers across their supply chains. But before such this new fund is started, it is important for the G7, as the most powerful countries in the world, to call for companies to close the $9 million gap still remaining in the Rana Plaza fund.

Gail Cartmail asked Merkel to use the G7 platform to tackle the exploitation of women that is particularly found in the garment industry where 80% of the workforce is female.  We also raised a concern that the EU currently gives trade privileges to countries such as Bangladesh on the condition they made improvements to labour rights, yet ITUC, UNI and IndustriALL have documented significant problems remain with the labour law and incidents of anti-trade union persecution is still taking place.  This suggests a need to review whether some priviledges should be withdrawn.  numerous abuses of labour rights , without consequences on the Bangladesh government.

Merkel said that ‘perhaps we can play a stronger role’ in linking trade privileges with labour rights.  Earlier in the meeting, Merkel had raised the idea that countries receiving development assistance from Germany should be required to uphold labour standards.

Unions at the meeting also highlighted the need for stronger enforcement of labour rights in global supply chains.

Brian Finnegan, Global Worker Rights Coordinator at the AFL-CIO made the point that the governments must press companies to respect labour rights as much at home as abroad, this was sadly not the approach currently being taken by the US government. He pointed out that workers routinely faced abuse of their rights in the USA, as showed by the union-busting taking place at T-Mobile USA (which is owned by the German company Deutsche Telekom).   Chancellor Merkel said in response that the National Action plan Germany is developing would apply to domestic as well as international operations.

Hassan Yusuf, President of the Canadian Labour Congress, noted that Canadian companies, particularly in the extraction industry, had violated the OECD Guidelines but not faced adequate sanction. John Evans, General Secretary of TUAC, agreed that there must be ‘consequences’ when violations of labour rights take place in supply chains.  He said that this could partly be achieved if the authority of OECD National Contact Points was strengthened.  Philip Jennings mentioned that UNI had made use of the German National Contact Point to build dialogue with DHL alongside the International Transport Federation global union - although there remained significant human rights issues to resolve.

Merkel agreed to take up with business ways of making commitments to the OECD Guidelines more binding. She said that Germany supported the idea of G7 countries peer-reviewing their National Contact Points – which was welcomed by TUAC and the unions present.

An important development in France was highlighted by Philippe Martinez, President CGT in France who stated that legislation was currently going through the French parliament which would legally commit companies to undertake due diligence processes for their operations – he said Germany and all the G7 countries should adopt similar legislation.

Read reports of the meeting from TUAC and UNI Global

You can download the trade union demands for the G7 below.