How the shareholder-first business model is contributing to inequality

We studied the total net income, dividends and share buybacks for the current FTSE 100 companies index over the last five years. 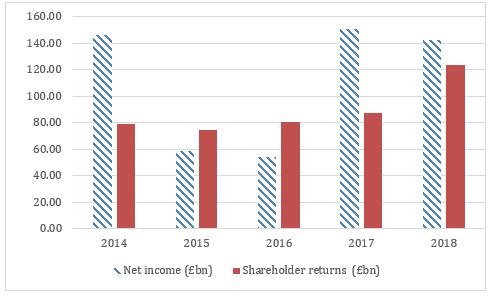 Examining sectors, we found that:

New analysis of dividends and share buybacks paid by the FTSE 100 over the last five years reveals the extent to which companies protect and increase payments to shareholders, even when company finances are struggling. Putting shareholders first means less money for workers and other stakeholders, hampering efforts to tackle in-work poverty and climate change.

From 2014 to 2018, returns to shareholders across the FTSE 100 rose by 56%, growing nearly seven times faster than the median wage for UK workers, which increased by just 8.8% (both nominal).

Over the same period, the UK’s largest listed companies generated £551 billion in profit (net income attributable to shareholders), and paid out £442 billion in dividends and buybacks. Even a small proportion of this money could mean better wages and working conditions for their staff and workers in their supply chains.

The UK’s largest companies could play an important role in reducing poverty and inequality, but the current business model is designed to maximise profit for shareholders. Employing 6.3 million people worldwide , with many more in their supply chains, their actions have a major impact on global working conditions and living standards.

1 in 10 working households in the UK live in poverty, comprising 8 million people in total, while at the same time the richest 34 people own the same wealth as the poorest 40% of the UK combined . The TUC and The High Pay Centre are calling on our political leaders to take immediate steps to fix the broken economic model that puts shareholders first.

The objective of this work is to contribute to the debate on the role of business in society and corporate governance reform. Our joint ambition is to advocate to all UK political parties to adopt policy reforms that tackle in-work poverty and promote sustainable development in the UK and internationally.

Related
content
Campaigns
A stronger voice at work
Everyone deserves to be paid and treated fairly at work. But in many workplaces the balance of power has shifted too far in favour of employers.
Join a union
Enable Two-Factor Authentication