A round-up of union news from across the South West

Want to hear from us about our latest news, campaigns and events? Sign up today

The latest edition of West Country Workers features articles about sexual harassment, unions on the buses, online activism, union holidays and the story of the return of the Tolpuddle Martyrs to Plymouth.
Order copies from your union or from southwest@tuc.org.uk PDF is online here

The current gender pay gap for all women workers in the South West stands at 17.6%, slight worse than the UK average at 17.3%.  This is equivalent to women in our region waiting until 5 March before they get paid, a day longer than the rest of the country.

But look closer and the pay gap gets a lot worse for women in parts of the South West. Tewkesbury women wait the longest, until 19 April with a pay gap of 30%. Gloucester women have to wait until 2 April, Sedgemoor and Stroud 29 March, Swindon 27 March, Dorset and Wiltshire 18 March.

The more local the figures, the greater variation and the more explanation is required. A small pay gap isn’t necessarily something to celebrate if men and women are paid equally badly such as in low wage Torbay where women get paid more than men. The Forest of Dean has a below average pay gap 7% but this is based on local jobs. When measured by people who live in the Forest, rather than work there the pay gap soars to nearly 30%. This is likely to be families who live in the Forest but where the man tends to travel out for better work and the woman works in a low paid job locally.

In other places the local pay gap is due to the impact of a particular employer such as Hinkley Point in which men tend to fill the jobs.

TUC Regional Secretary of the South West Nigel Costley said:  “Half a century since women fought for the right to equal pay, we are still seeing too many women being paid less than men because of their gender. At this rate, it will take another fifty years to close the gender pay gap. And it seems that the only way women get to earn the same as their male colleagues is if they earn a rock-bottom low wage where everyone is stuck at the start.”

Get on with it

Unions are frustrated at the delays by Government to enable the historic shipyard at Appledore in north Devon to reopen. Much depends upon agreement with national government over public support.

The yard was founded in 1855 and recently helped build parts of the Royal Navy’s two aircraft carriers, the Queen Elizabeth and the Prince of Wales, but closed in March 2019.

107,000 workers in the South West reporting they are on a zero-hours contract – an increase of 42% (32,000 workers) from the previous year – and the highest since records began.

Communities in the South West are reeling from weeks of heavy rainfall and surging flood waters.A decade of austerity has taken its toll on flood defences and the Environment Agency. There are approximately 2,300 fewer staff working at the agency today than there were in 2013 (numbers have dropped from 13,000 to 10,700).

In 2018/19 the government spent £792.4 million on ‘flood defences and coastal erosion’. That's a tiny percentage of overall government spending – in fact, it's less than 0.1% of the £811.4 billion of public sector income over the same period.

South West TUC Regional Secretary Nigel Costley said: “we need a consistent approach to spending on flood defences, especially if flooding is to become more likely in the future”.

Employers in the South West claimed £2.7bn worth of free labour last year because of workers’ doing unpaid overtime. More than 450,000 people put in an average of 7.2 hours a week in unpaid overtime during 2019. On average, that’s equivalent to having £6,000 taken out of individual pay packets.

As a child Dave experienced the Nazi bombing of Yeovil and saw the terror and fear it created, becoming a lifelong anti-fascist and anti-racist. A bout in a fairground boxing booth, saw Dave aged 14, knock out the professional and started a lifelong love of the sport.

Dave became active in the National Union of the Footwear, Leather and Allied Trades (NUFLAT) and was secretary of the Yeovil and District Trades Union Council for many years. Dave formed the Yeovil Workers Association which campaigned on many issues from housing to the Vietnam war. He edited The Yeovil Worker, a lively local duplicated newsletter selling at 2p per copy, and stood as a Communist Party candidate for Yeovil Town Council.

He was a founding member of Yeovil Amateur Boxing Club, a member for over 50 years and was still coaching at age 82. He leaves a legacy of empowerment, self-belief and solidarity amongst people of all ages who knew him.

Thomas Helliker was a young apprentice shearman in 1803 when Littleton Mill, near Trowbridge was burned down in protest at the introduction of machinery. He was apprehended on false accusation despite having an alibi.  Although he probably knew those who had set the fire, he refused to name them. He was tried in Salisbury and was hanged at Fisherton Goal on his 19th birthday on 22 March 1803 despite public outrage. It is likely that he had been framed by powerful clothiers determined to make an example.

The Rector has said that anyone who wishes to attend the church Sunday service at 10.45am beforehand is very welcome.

The I-MMIGRATE exhibition presents a selection of portrait photography and oral histories of people who chose to travel and build their lives in the UK.

It is a project by Nowans Community Trust, in partnership with photojournalism students at the University of Gloucestershire, and with the collaboration of the Black Elders in Gloucester and African community in Cheltenham.

Fighting for hearts and minds

Email the details of events to the TUC at: healthandsafety@tuc.org.uk

M-Shed, Bristol Harbourside
BRHG are currently confirming the programme of talks, walks, performances and exhibitions for the 4th Bristol Radical History Festival. The two main themes this year are State Surveillance since the French Revolution and Postwar Britain (1945-1951). Details here...

TUC Education in the South West

Courses for reps, Spring and Summer 2020

We will be running our 10-day Next Steps for Safety Reps course, for more experienced safety reps and three short courses; Mental Health Awareness, Green Reps and Discussion Leaders at Bristol College.

Find more info about these courses and apply here: Courses in Bristol

We will also be running a three - day Menopause in the Workplace course in Exeter: 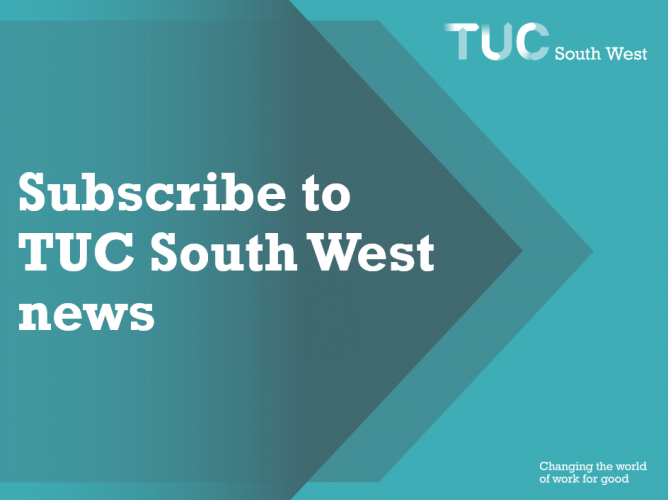