Protest at killing in Colombia

The TUC General Secretary has written to the Colombian Ambassador to protest at the murder of transport union leader Fernando Florez.

The TUC General Secretary has written to the Korean Ambassador on the de-recognition of the Korean Teachers and Education Workers Union.

On 8 October, at least 9 people were killed in a factory fire at Aswad Composite Mills of the Palmal Group in the Gazipur district near Dhaka. IndustriALL Global Union and UNI Global Union confirm their commitment to the comprehensive 5-year plan of the Accord for Fire and Building Safety in Bangladesh. Read how more than 100 global brands have now signed the Accord here

On 24 October, the families of workers who died during the Rana Plaza factory collapse in Bangladesh held a candlelit vigil to mark six months since the day the tragedy occurred. Watch the video here

Iran remains a country without rights

Despite the optimism in the west surrounding the election of reformist Iranian President Hassan Rouhani earlier this year, little has changed on the ground for working people in Iran, and the leaders of independent trade unionists remain in jail, along with many others fighting for truth and justice.

FIFA’s offer of only a ‘courtesy visit’ to the Emir of Qatar is totally inadequate and fails to put in place any plan to stop more workers dying…says the ITUC. Supporters of the global campaign are also demanding FIFA President Sepp Blatter give a detailed report to next month’s Executive Committee meeting in Brazil about what FIFA has done in the two months since it finally acknowledged the problems facing workers constructing World Cup infrastructure in Qatar.

At the request of 17 national trade union centres from the Arab region (in Algeria, Bahrain, Egypt, Libya, Jordan, Mauritania, Morocco, Oman, Palestine Tunisia and Yemen), the ITUC General Council meeting in Brussels (9-11 October) has endorsed the process of creating a new structure for the Arab countries.

Hundreds of thousands of Indonesian workers are taking strike action and holding mass rallies to demand a fair minimum wage and protection for workers from phony employment arrangements which remove employer obligations through 'outsourcing' arrangements.

Commonwealth needs to get serious on human rights at work

The Commonwealth’s ‘Committee of the Whole’ met in London in October. Their task is to draft the communique that will be formally adopted at the Commonwealth Heads of Government Meeting (CHOGM) in Sri Lanka later in November. The trade unionists will be demanding that the Commonwealth puts its commitment to human rights into practice, in a series of measures, set out in detail in the Commonwealth Trade Union Group submission

Why the World Bank must do better at Doing Business

On the eve of the release of the World Bank’s Doing Business 2014, civil society organisations called on the World Bank to implement the major recommendations delivered by an independent panel in June, which included ending the ranking of countries according to an “Ease of Doing Business” index and permanently removing the report’s controversial tax and labour indicators.

The second in a series of briefings from the International Trade Union Confederation (ITUC) includes a review of the G20 agenda on tax avoidance and on long-term investment.

Amidst heightened risks of financial instability in major developing country economies, the Fund was forced to re-assess its global economic prognosis and risk assessment in an analysis provided to the G20 summit in September.

During the 68th Session of the United Nations General Assembly, the governments of South Africa and Ireland convened a Special Event to follow up efforts made towards achieving the Millennium Development Goals. Read more here ACT NOW and support the UN's staff unions are campaigning for Ban Ki-moon to reverse his decision by the end of the year.

Starbucks has lived up to its fame as the most anti-union business in Chile. In October, as it announced record profits, the company rejected all Starbucks Workers´ Union demands, included in a draft collective agreement.

Take action: Tell Starbucks to negotiate in good faith with workers in Chile.

4000 migrant workers will die before a ball is kicked in the 2022 World Cup unless FIFA and the Qatar authorities take action. FIFA must break the conspiracy of silence over the treatment of migrant workers in Qatar and make workers’ rights a condition of Qatar hosting the World Cup in 2022.

Take action and tell FIFA to choose a World Cup venue where workers’ rights are respected.

The world's 53 million domestic workers (most of them women and girls) now have a new voice to represent them at the international level. The founding congress of the International Domestic Workers Federation was held in Montevideo Uruguay October 26 to 28.

Huber Ballesteros, one of Colombia's most recognized unionists, was arrested in August for leading mass strikes. The international labour movement is organizing a global campaign for his release. Listen to the RadioLabour interview with Mariela Kohon, Director of Justice for Colombia. 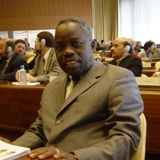 The general secretary of the Confederation of Free Trade Unions of Côte d’Ivoire (Dignité), Basile Mahan Gahé, died in Abidjan on Monday 16th September 2013. In tribute to the recently departed African trade unionist, here is the last interview he gave to ACTRAV INFO, during his stay in Geneva.

Stand Up For Women aims to become the ‘Comic Relief for Women’ – with a massive TV comedy gala every year to raise money and awareness for women’s charities. This is their second comedy show, the first being a huge success in London’s West End earlier this year.
Full details here

VSC Film showing of "April: between peace and rage"

This short Venezuelan film looks at the violence of the right-wing opposition in Venezuela against supporters of the elected government in the afternath of Nicolas Maduro's election victory in April 2013, which led to the death of 13 people.

Film Screening – Swaziland: The King and the People

There are a number of websites with useful information for trade unionists, policy makers and campaigners. Details here: Useful websites

Visit the address below to view the document in full, in print format or in text-only format.

The person responsible for the e-bulletin is:

[DO NOT DELETE THIS TEXT]