Author
Anjum Klair
Published date
19 Feb 2019
Everyone deserves some certainty about the hours they will work each week, so it’s unacceptable that 850,000 workers remain on zero-hours contracts.

Hundreds of thousands of workers are still stuck on insecure zero-hours contracts, according to the government’s latest statistics.

The TUC believes everyone should have the right to a contract that guarantees the hours they work.

But the 850,000 workers on zero-hours contracts do not know how many hours they’ll be working each week. They don’t even know if they’ll get any hours at all.

The number may have fallen by 50,000 since last year, but this is just a drop in the ocean.

And two-thirds of those on zero-hours contracts have been stuck on them for over a year, suggesting that employers are using them as a long-term strategy.

The Government’s response to the Taylor Review was to introduce the ‘right to request’ a more stable and predictable contract after six months in the job. We have repeatedly said the ‘right to request’ is no right at all. It provides workers with the option to ask, but no right to receive, so the power dynamic remains firmly in favour of the employer.

A TUC-commissioned poll of workers on zero-hours contracts found that:

In addition, the poll found many on zero-hours contracts lose out on the rights that are important to them and which most of us take for granted in the workplace:

On top of the unpredictability and anti-social hours, they suffer a pay penalty. Working people on zero-hours contracts have an average hourly pay rate of £7.70, compared to £11.80 for those not on zero - hours.

Zero-hours contracts are prevalent in all regions and nations.

Level and rate of people aged 16 and over on zero–hours contracts, by region/nation

They are also prevalent in all industries. However, they are concentrated in accommodation and food, and health and social work, where over a fifth of the industry are on zero-hour contracts.

Level and rate of people aged 16 and over on zero–hours contracts, by industry 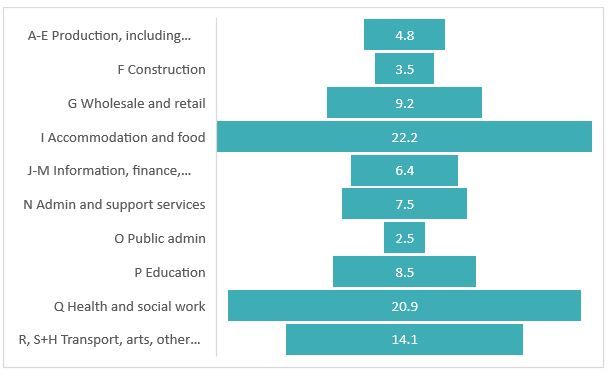 Those on zero-hours contracts are often trapped in jobs that are so insecure they’re unable to plan childcare or their finances.

That’s why we’re calling for an outright ban on zero-hours contracts and for workers to get guaranteed hours that allow them to pay bills and plan ahead.

They deserve a contract that reflects the reality of their working life and provides them with employment rights that should be a given, such as sick pay and holiday pay.

Related
content
Campaigns
Control over when you work
We need reliable jobs that pay enough to keep up with the cost of living and leave us with enough time to see loved ones. But millions are stuck in low-paid, insecure work that makes planning their life a nightmare.
Blogs
The time is now - why you should join us on Saturday
Frances O'Grady - 14 Jun 2022
Ministers should seek to resolve strikes, not bring in strike-breakers
Tim Sharp - 13 Jun 2022
A stronger social partnership
Shavanah Taj - 07 Jun 2022
Only good, well-paid work is a route out of poverty
Alex Collinson - 26 May 2022
Join a union
Enable Two-Factor Authentication