Britain's Brexit options: What would they mean for working people?

Author
Niamh Ní Mhaoileoin
Published date
30 Nov 2017
As the Brexit negotiations move towards the next stage, the government should be rethinking its strategy. Britain needs a jobs-first, rights-first deal that puts the needs of working people ahead of the hard-Brexit ideology of the Tory fringe.

The trade union movement has made its priorities clear.

First, jobs and living standards must be protected through frictionless trade. Second, workers’ rights in Britain must keep pace with the rest of Europe. Third, citizens must be able to enforce consumer, environmental and labour standards. Fourth, workers must get a say over trade issues through union involvement. And finally, the Good Friday Agreement must be protected.

So how do the options available match up against those tests? 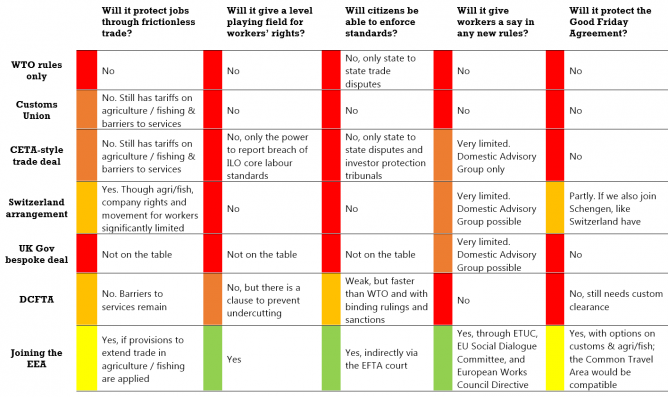 It’s pretty clear that a ‘no deal’ reversion to WTO rules is the very worst option. And joining the EEA is obviously the best.

But what exactly does each option involve?

If Britain crashes out of the EU without a deal, we would immediately revert to World Trade Organisation (WTO) rules. Under those terms, there’s no requirement to comply with international labour standards protecting workers rights, let alone EU-level standards. And it’s a costly option, since tariffs and other barriers would immediately go up, disrupting trade. It would be reckless to go down this path.

This is the model that applies to Turkey. Deals like these don’t include clauses upholding labour standards so rights wouldn’t be protected. And tariffs would be applied to agricultural products, which would drive up the price of food. There would also be barriers to trade in services. So this isn’t a great model either.

Boris Johnson and other government ministers have pointed to the EU-Canada Comprehensive Economic and Trade Agreement (CETA) as a model agreement. But trade unions campaigned against CETA because it didn’t adequately protect workers’ rights or public services – although it does offer lots of protections to foreign investors!

British workers would be at risk of losing rights under this kind of deal with the EU, tariffs would apply to agriculture, and there would be some barriers to trade in services as well.

When Theresa May gets grilled on Brexit, she usually claims that her government will negotiate a tailor-made deal that gives Britain all the best elements of EU membership with none of the rules. But that’s not how negotiations work. The EU simply won’t accept British cherry-picking – so the sooner we abandon the fantasy the better.

Switzerland has a series of extremely complicated bilateral deals with the EU, which the EU definitely doesn’t want to replicate. And Switzerland isn’t required to abide by EU employment law, so workers’ rights are vulnerable. While trade is smoother and the Swiss have negotiated protections for the local labour market while upholding freedom of movement, the agri/fish sectors would still be significantly limited.

A little better, but nowhere near good enough.

The EU has a ‘deep and comprehensive free trade area’ with Ukraine. The agreement sets out in precise legal detail the nature of Ukraine’s relationship with the EU, and Ukraine is legally required to adhere to EU law and standards. But the current monitoring and enforcement mechanisms aren’t good enough and would need to be strengthened in the case of an EU-UK partnership. It would allow mostly frictionless trade of goods, but not services.

The OECD estimates that Brexit on these terms would cost the UK 5.1 per cent of GDP.

Membership of the EEA

This is often called the Norway option. It allows countries to participate in the single market, ensuring barrier-free trade in goods and services (except in agri/fish, although it’s possible to extend the agreement to cover them – which we would need to do), as long as members uphold the EEA’s technical, safety and legal standards and abide by EU laws. So British workers’ rights would keep pace with the rest of the EU under this model, and our jobs and living standards would be protected. The Good Friday Agreement would also be protected.,

So this is the option we’re backing. We don’t think the single market is perfect, and we’re open to other suggestions – but so far none of them have scored nearly as high on our key tests.

It was a huge error for the government to rule out continuing membership of the single market in and the customs union. The government should keep all options on the table.

Read the full report: Putting Brexit to the test

Related
content
Campaigns
Our Brexit campaign
Crashing out of Europe without a plan risks many of our hard-won rights at work, and the thousands of good jobs that rely on trade. If we end up with a “no deal” Brexit, workers will be the ones who pick up the tab.
Blogs
Workers unite to resist farcical economic policy
Geoff Tily - 05 Aug 2022
Forget cheese, fashion and football - France is leading the way in affordable energy
Liz Blackshaw - 01 Aug 2022
How to build inclusive construction – some lessons from Hinkley Point C
Anna Markova - 05 Jul 2022
The time is now - why you should join us on Saturday
Frances O'Grady - 14 Jun 2022
Join a union
Enable Two-Factor Authentication