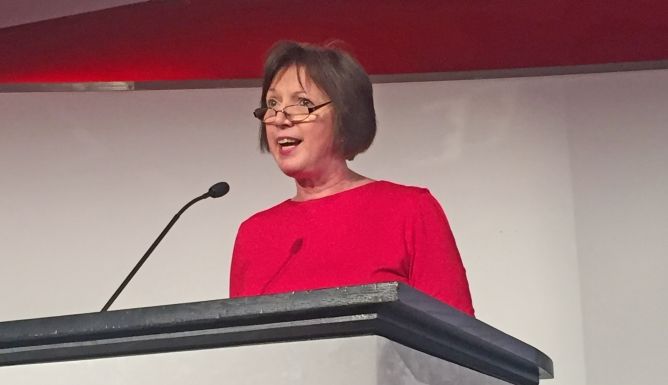 Always a pleasure to be with you sisters.

The time for sisterly solidarity feels more urgent than ever.

In the last few weeks we've had a New Right Polish member of the European Parliament assert that women deserve to get paid less because we are smaller, weaker and less intelligent than men.

We discovered that Uber doesn't just rip off its drivers. It also gives license to sexual harassment of its women engineers too.

And, to add insult to injury hands out free leather jackets to its male engineers as a thank-you; but says that women engineers won't get jackets because they don’t employ enough women to warrant placing an order.

And that's before we get onto the subject of the Budget yesterday.

From a government led by a woman but that puts women last.

A government that can find spare cash to cut corporation tax but can't find the cash to reverse cuts to universal credit.

That shells out good money on grammar schools but says it can’t properly fund the rest of education or the NHS.

That claims to be the party of working people but, year after year, refuses to give public sector workers, most of them women, that most basic of rewards for hard work - a decent pay rise.

But trade union women keep on pushing back.

We’ve campaigned for a woman’s right to choose in Ireland and Poland. And we’re ready to defend it here in the UK too.

We've said a big ‘no’ to sexist dress codes – whether to wear high heels should be a choice women make, not their bosses.

And women have been at the heart of our continuing campaign against that nasty, undemocratic, freedom denying Trade Union Act.

So thank you everyone for your hard work.

Determined that we should shout louder about our success.

And confident that we're the ones who’ll get to shape our own future.

But I have to be frank with you.

We face the toughest political and economic climate I can remember.

A right-wing Tory government; the profound uncertainty of Brexit; the alarming spread of right-wing nationalism including, not least in the form of that orange nightmare that is Donald Trump. And his mini-me Nigel Farage.

I hope that President Trump doesn’t get that state visit to Britain.

But if he does, I think we have an opportunity to show the depth of our disapproval.

To demonstrate our support for our friends in the United States.

And to spell out, loud and clear, the new deal on jobs, rights and voice that working people really need.

And sisters, I hope you will agree with me that, black and white, gay and straight, young and old, disabled or not, it must be women who are up there at the front of that protest.

So, I see three key priorities for us in the year ahead.

The first is to make sure working people do not pay a price for Brexit.

They’re still paying the price of the financial crisis and, with inflation hitting pay packets ever harder, they just can’t afford to lose more.

Britain must not become a Sports Direct sweatshop of Europe.

That would be bad for workers here.

And it would be bad for our friends in France, Germany and everywhere, if other workers end up being undercut by us.

So our red line for Brexit negotiations is safeguarding pay, jobs, and rights.

Rights which millions of workers – in particular women – depend on.

And the right to paid holidays.

All backed up by the European Court of Justice.

Now the government says it will protect those rights currently guaranteed by Europe.

But this is not just about protecting what we fought for in the past.

We want guarantees that workers won't get left behind in the future.

So when it comes to negotiating a new agreement with the EU we want a “social progress" clause.

So that when workers’ rights improve in Europe, they do the same here.

If the Conservative government is willing to negotiate a new deal with Europe that provides common standards for making washing machines and selling financial services.

Then they should be ready to sign up to a deal that delivers common labour standards too.

What must be clear sisters is that we won't accept a race to the bottom.

No more slashing of corporation tax.

No more flogging off public assets.

And no more TTIP- style threats to the NHS.

And we will stand firm against racism and xenophobia too:

In this year, of all years, when we remember the 40th anniversary of the Grunwick strike.

We’ve all seen what’s happened since the referendum.

The rise in hate crime. The casual prejudice. The licence given to anti-immigrant views.

So today l want us to send a strong message of solidarity to BME and migrant workers.

Including, the brilliant women who keep our NHS running. The women who work for a pittance in our care homes.  The women who have worked here for years, brought up families, but have been left hanging, not knowing what the future holds.

Let’s send them a message. We stand with you. The government must do the right thing and guarantee the right to remain.

Sisters, our second priority must be to secure a new deal for women workers.

Tackling the root causes inequality. Delivering fairness and positive flexibility for all. Giving every woman the chance to fulfil her true potential.

The gender pay gap is closing, but far too slowly.

One in ten workers are on zero hours, casual and low-paid self-employment.

And we face plenty of other injustices too.

None of this is helped by the scandal of those employment tribunal fees that price women out of justice.

But what we need most of all is strong, growing unions winning for women workers.

So our mission must be to organise a new generation of women trade unionists.

In their different ways, each showed that women will always be stronger together.

We must be there for women.

But, sisters, we need men to be there for women too.

Solidarity must be a two way street.

And our culture must reflect that.

Now, I was told recently that some men in the movement thought I needed to show some more aggression.

Well sisters, as some of those men have discovered, on occasions I can get angry like the best of them.

But trade unionism isn't just about aggression or who shouts loudest.

It's about compassion. It's about justice, dignity and common sense. It's about a culture that celebrates the contribution of working people from all walks of life.

Women are great trade unionists in our own right. We don’t need to be carbon copies of men.

Which takes me to our third priority: tackling violence against women.

There is a President in the Kremlin who has decriminalised domestic violence;

And a President in the White House who has boasted about sexually assaulting women.

This year the TUC added our voice to the ETUC’s call for Safety at Home and Safety at Work.

We campaigned against cuts to women’s refuges.

And we exposed the shocking scale of sexual harassment in the workplace.

Our report showed that two thirds of young women have experienced some form of sexual harassment.

As have more than half of all women.

Too many women are being subjected to sexual bullying at home, at work and on social media.

It's designed to intimidate women out of public space - to keep us in our place.

But the truth is that men who bully women are afraid of us.

And we must face them down.

Showing that our values – dignity, equality, tolerance – will always win through.

And we lost her in the most horrific circumstances imaginable.

Jo Cox was an inspiration to us all.

A feminist, internationalist and champion of working people world-wide.

And at this moment of great danger – when the hard right wants to divide worker against worker – that message is more important than ever.

And the best way we can honour Jo’s memory is by fighting for the same great causes to which she devoted her life – and ultimately gave her life.

And if we can do that – if we really can bring people together – then we can win a better future not just for women, but for workers everywhere.

Because when women rise, all workers rise.

You can set it up now or do it later. You have until 28/02/2020 to complete setup after this date you will be not be able to login.