Welfare States: How generous are British benefits compared with other rich nations? 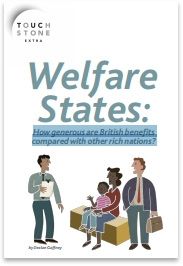 How generous is the UK social security system for people of working age compared to those of other wealthy nations?

The question is complicated, partly because social security systems typically serve a range of different purposes. They provide protection for workers against risks to income from unemployment, sickness and disability; they support family life through paid maternity and paternity leave and allowances for children; they redistribute towards low income groups, whether out of work or, increasingly, in work and on low pay; and they provide financial support for additional costs arising from disability. Moreover, these functions are met using different mechanisms: through social insurance, funded in whole or in part by the contributions of employees and employers, and through universal and means-tested benefits funded through taxation. Welfare states also differ in how far they use cash benefits as opposed to direct provision to support housing needs and the additional costs of disability, for example; and they also differ in the extent to which benefits are subject to taxation.

These differences mean there is no single criterion that allows us to compare the generosity of social security systems. Figures on benefit expenditure are perhaps the most widely cited indicators. But although there is a very strong relationship between the level of spending and broad social outcomes such as poverty and economic inequality, expenditure data on its own does not tell us about people’s final incomes or how resources relate to needs. Alternative approaches involve looking at the actual entitlements of individuals and families in different situations, taking account of all direct taxes and benefits and of variations in the cost of living to see how incomes compare in different countries. In this paper we use both approaches but with more emphasis on the second, using the most recent results from international comparative studies to build up a broad picture of how income protection varies in modern, rich nation welfare states.

We focus in particular on three functions of social security: protection for unemployed people, support for families and redistribution towards low earners. It is important to look at these functions separately as they underpin important variations in social provision between countries. We separate these functions by showing entitlements for two family types: single people without children and couples with children. Entitlements for single people give a sense of how the social security system treats workers in their capacity as workers; entitlements for families allow us to see how people are treated in their capacity as parents. We also take account of how welfare states support people’s housing costs because this factor has a big impact on estimates of relative generosity.

In most of the countries we look at many unemployed people are entitled to earnings-related benefits: the UK, along with Ireland, Australia and New Zealand, does not provide earningsrelated unemployment benefits. Inevitably, this means that the UK looks ungenerous compared with many other systems. But generous earnings-related benefits for those who meet contributions conditions often co-exist with far less generous minimum income benefits for those with incomplete contributions records, leading to stark differences in incomes among unemployed people in many countries. At the same time family benefits, which are usually not based on earnings or contributions, tend to reduce the differences in income between those on contributory and income-related benefits.

These factors pull in different directions when it comes to assessing the UK’s relative position. The absence of earnings-related benefits makes it quite spectacularly ungenerous to workers in their capacity as workers. In contrast to most of the Western and Nordic European states, and even to the United States and Canada, being in employment in the UK does not confer much additional income protection. Moreover, the other countries without earnings-related benefits in our sample (Ireland, Australia and New Zealand) prove to be more generous than the UK. However, not all countries with earnings-related benefits are more generous than the UK to uninsured workers who are not entitled to those benefits because they have discontinuous employment records or are at the start of their working lives, for example.

Family benefits change the picture. Although the UK remains at the less generous end of the scale, differences in income between countries are less marked for couples with children. Earnings-related benefits remain important in driving international differences but there is less of a gulf between these benefits and minimum income benefits because means-tested family benefits tend to erode the difference between the two. Housing costs also play a role in making final incomes more similar; more generous benefit entitlements in other countries often have to meet some or all of the cost of housing, whereas the UK has a separate benefit for this purpose. What is striking is how much work family benefits have to do in the UK to bring incomes up to international norms. This is, we suggest, mainly a reflection of the very low level of income protection that people receive in their capacity as workers. Similarly, family benefits (including tax credits) play a major role in bringing the incomes of low-waged couple families up to levels comparable to other European countries. But wages are generally lower in the UK and low-paid single workers, even with some support from tax credits, have low incomes by international standards.

Declan Gaffney has worked in public policy and research since 1997, as an academic, as advisor to regional and national government and as a freelance policy consultant. He has written and published extensively on child poverty, public finance, social security and labour market