SERTUC continues support for the PCS strikers at the National Gallery 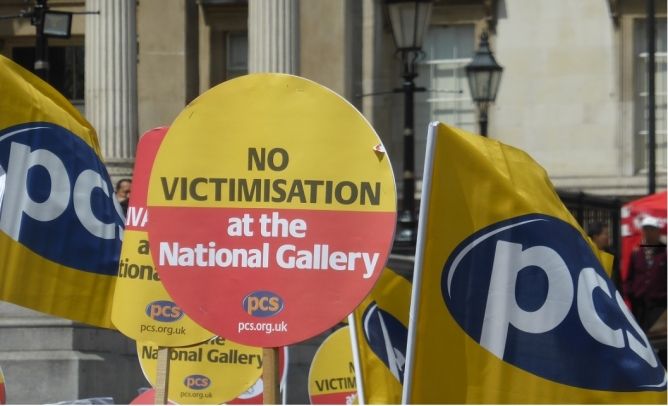 PCS members at the National Gallery remain in dispute with management. The PCS represents more than 200 gallery assistants and other staff at the Gallery. The original aims were to win the London Living Wage and to stop the outsourcing of 400 gallery assistant jobs.

Management at the National Gallery conceded that it will pay the London Living Wage of £9.15 from the beginning of July to existing staff, although the position relating to new staff is to be clarified.

However, the fight against the outsourcing of gallery assistants continues and the campaign has the added goal of getting the senior PCS rep there, Candy Udwin, re-instated, after she was dismissed by the employer.

The National Gallery announced its intention to put the services provided by 400 gallery assistants out to tender in January 2015. Its declared aim is to ‘reduce costs’. PCS members voted to take strike action, which began with a 5 day strike, 3 February 2015. The tender was publicised in April 2015 and it is believed that there are 4 interested parties, including G4S and CIS Security. Management has refused to discuss PCS’ alternative plan that keeps direct employment but offers to provide the revised working hours etc that management says it is seeking.

In Autumn 2014 the private security firm CIS was used by the Gallery to staff the blockbuster Rembrandt exhibition. The firm was then given work in the Gallery’s Sainsbury wing, without any tendering process.

On 2 February 2015, the day before the first strike began, Candy Udwin was suspended. She was dismissed 13 May 2015 for alleged gross misconduct. On 10 June 2015 and Employment Tribunal awarded Candy ‘Interim Relief’, finding ‘provisionally’ that she had handled information in a way that was entirely consistent with her duties as a trade union rep. The Interim relief also means that the Gallery must continue to pay her salary until the full Employment Tribunal hearing. An internal appeal hearing scheduled 2 July has been postponed by the Gallery. The Employment Tribunal will be held in the Autumn.

SERTUC attended and spoke at a protest rally at the Gallery, Monday 19 January, assuring the PCS of the Regional Council’s continuing support.

SERTUC promoted the national demonstration  in Trafalgar Square Saturday 30 May with our banner, and Megan Dobney, SERTUC Regional Secretary spoke.

SERTUC’s Creative and Leisure Industries Committee organised a solidarity meeting with the PCS strikers, and organised a bucket collection.

Candy Udwin spoke at the SERTUC Regional Council in April, updating unions and trades councils about the dispute.

SERTUC has publicised the petition and other campaign initiatives.

There was an adjournment debate in the House of Commons, Wednesday 24 June, secured by John McDonnell MP. 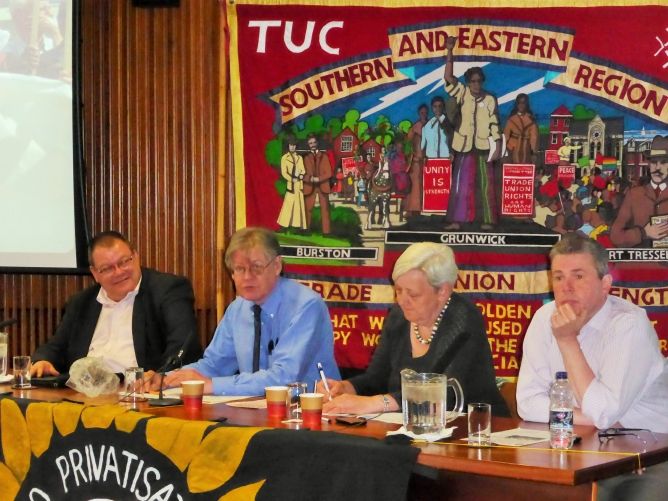