NO! to Immigration Street YES to Solidarity Street 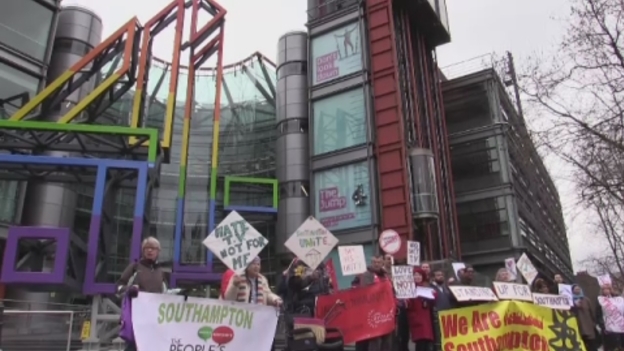 Last Saturday (31 January) the TUC migration campaign supported Southampton Communities Alliance colleagues at a 'Stand Up For Southampton' demonstration outside Channel 4 headquarters in London to protest against the channel’s plans to screen a documentary titled ‘Immigration Street’.

The show that is based in Southampton’s Derby Road, is scheduled to be shown in the period running up to the general election. The TUC has been supporting Southampton Communities Alliance in its campaign to stop the show being screened as it is likely to stigmatise local people who are part of recently arrived communities and settled communities as the cause of economic and social problems. Local Southampton city representatives are concerned the airing of the proposed programme will have a detrimental effect on the local community and will exploit vulnerable people, risk the attraction of extremists and incite racism.

Channel 4 commissioned Love Productions (the same production company – that made ‘Benefits street’, a documentary screened last year which negatively represented people on benefits in Birmingham) to go ahead and make the show a six part series despite vociferous opposition from the majority of local residents.

Following a meeting with local representatives including Southampton Communities Alliance where Channel 4 refused to cancel the show, a crowd of over 50 people, including representatives from SCA, trade unions and other campaign groups gathered outside Channel 4 on Saturday despite the inclement weather.  A petition was handed in with over 1700 signatures calling on the publicly owned broadcaster to cancel any airing of ‘Immigration Street’. There were heartfelt speeches from local Newtown residents, local Southampton campaigners, and from the TUC and Unite the union, which helped to convey messages of community solidarity, demands for decent conditions, equality and respect for all, whilst denouncing discrimination, division and exploitation of local people by some sections of the media.

The ongoing local campaign activity by local trade unionists, residents association, advocacy groups, community groups, voluntary organisations, local MP, councillors students and local activists working together on such widely felt issues, that have led up to and includes the demonstration has made an impact already. On Tuesday a Channel 4 spokesperson confirmed that the series was now going to be shorter than initially planned.

An alternative message to counteract the programme (if it goes ahead in this David verses Goliath battle) will be short films made by local Solent University students. These films will be posted on social media and screened at local venues in Southampton, showing real stories told by those who live on and around Derby Road.

You can set it up now or do it later. You have until 28/02/2020 to complete setup after this date you will be not be able to login.