INCA-CGIL and TUC launch Italian 'Working in the UK' guide 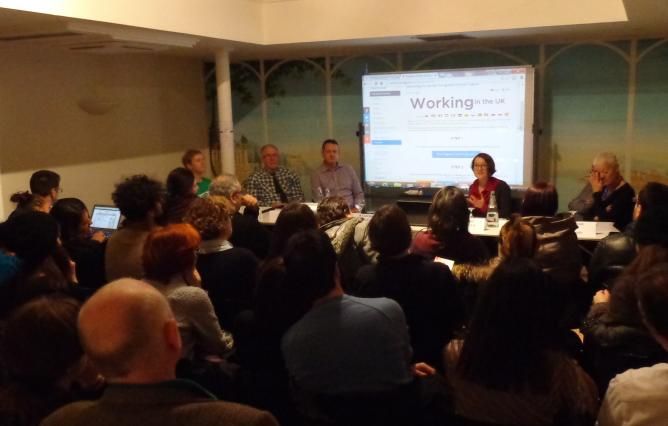 On Friday 23 January, the TUC held an event with INCA-CGIL (part of the Italian trade union Confederazione Generale Italiana del Lavoro) to launch the Italian version of the new 'Working in the UK' guide we have jointly developed. The event was held at the INCA centre in London which CGIL runs to give advice on welfare to the Italian speaking community.

The event was attended by Italian workers and featured speeches from Marisa Pompei, Director of INCA-CGIL (UK) and Rosa Crawford, Policy officer in the TUC International Department, as well as a question and answer session with representatives from unions on how to join a union and deal with workplace problems. Audience members reported they had faced problems with short-term contracts, discrimination and claiming fair pay at work.

Official figures show 250,000 Italians registered with AIRE (official register of Italians resident abroad) and a similar number unregistered to give a total nearing 550,000 for the whole of the UK with major concentrations in London, Birmingham, Manchester, Leeds, York and Liverpool.

At least 60% of  new Italian migrants are under 35 years of age and 25% are aged between 35 - 44 .  Unlike Italians of previous generations who tended to be employed mostly in hotel and catering sectors, the new generation of Italian workers are employed increasingly in highly skilled occupations in sectors such as health, schools, universities, engineering,  finance, commerce, design and transport as well as catering and services.

The strong message from the evening was that for new and settled migrant workers to be protected at work it is important they are aware of their rights and join a trade union.

The online version of the Italian guide can be found here: http://www.tuc.org.uk/lavorareNelRegnoUnito