Beyond Shareholder Value: the reasons and choices for corporate governance reform 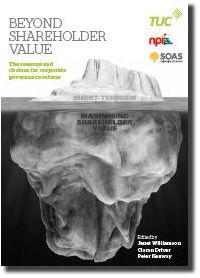 ​The TUC book Beyond Shareholder Value: the reasons and choices for corporate governance reform is a collection of essays by authors from the City, politics, unions and academia, making the case for reforming the UK’s corporate governance system, which many believe is letting down businesses and the wider economy.

The book includes 17 essays from organisations ranging from the Institute of Directors to the Fabian Society and the TUC. Other authors include Patrick Diamond from Queen Mary University, Vicki Pryce from the Centre for Economics and Business Research, Andrew Smithers from Smithers & Co Ltd and economist and author John Kay.

All of the contributors agree that the current system of corporate governance is not serving the economy as well as it should and needs to be reformed. While there are a variety of proposals for how the shareholder value system needs to change, a number of themes are picked up by several authors.

The most significant is that of representation, focusing on who participates in decision-making, both within companies and also within the wider economy. Ideas range from mandatory worker representation on company boards; voluntary stakeholder councils; stakeholder involvement in nomination committees for non-executive directors; wider representation on the regulatory bodies such as the Financial Reporting Council and the Takeover Panel; and more.

The book includes a number of proposals for institutional reform including the introduction of different classes of shares to differentiate between short-term traders and those with a long-term stake in a company, and tightening the rules surrounding takeovers. Reforms to company and personal taxation, such as using capital gains tax to encourage long-term share ownership, are also suggested.

Download Beyond Shareholder Value: the reasons and choices for corporate governance reform [PDF]