Yorkshire and Humber TUC has set up a Low Carbon Task Force to bring together all the key partners in the region to help develop a regional low carbon transition plan: unions, business, Local Enterprise Partnerships and environmental groups.

If there was ever a testbed for modern industrial strategy fit for the future, it’s in the Yorkshire and Humber region. This is a region in transition but without a plan.

Our region has probably the highest concentration of the UK’s foundation industries and coal and gas power stations in the UK. This includes major power plants like Drax, as well as steel, cement and chemical works, glass manufacturers, and heavy energy users in brewing and food manufacture. The regional TUC reckons that up to 28,000 people work in these major plants, and three or four times as many in their supply chains.

This map shows 26 of the region’s biggest emitters of carbon dioxide and other greenhouse gases. About 28,000 people work directly in these industries, and thousands more in the supply chain and local economy. The TUC study, Strategies for a low carbon industrial future in Yorkshire & The Humber (2015) provides a deep analysis of the region’s manufacturing and energy employment and carbon emissions, and the jobs and industrial plant at risk.

There are more sites than this if we could add the food manufacturers, brewing industries and other major plant.

But this region has lost tens of thousands of manufacturing jobs. The Leeds Local Enterprise Partnership (LEP) said industrial decline has hollowed out the workforce - the ‘missing middle’ - as good paying, skilled industrial jobs disappear while low paid work (and a few high-end financial sector jobs) move in. 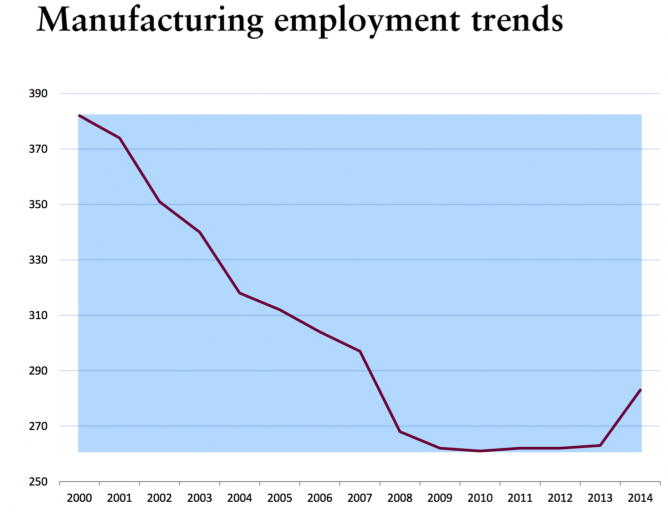 Our region has seen the consequences: industrial decline brings poverty, low skills, lack of opportunity, and the resentful sense of communities left behind that is now driving political change. Yorkshire and the Humber voted ‘Leave’ on the back of this ‘left behind’ economy.

The regional TUC has set up a Low Carbon Task Force to bring together all the key partners in the region to help develop a regional low carbon transition plan: unions, business, Local Enterprise Partnerships and environmental groups.

Our AGM in March 2018 supported this plan with a powerful resolution, committing the TUC ‘to working with all partners to find sustainable solutions that can ensure the continued operation of these essential industries and protect the jobs they provide.’

In 2014, the Yorkshire & the Humber TUC was chosen as one of seven leading industrial regions in Europe to take part in a special report, Industrial regions and climate change policies towards a just transition. The project was led by the European TUC, which hosted debates on fringes of the UN’s climate conference in Paris in December 2015. The report was one of many influences persuading governments to adopt the principle of a just transition into the opening Preamble of the Paris Agreement.

The region can already be proud of a number case studies where employees, unions and employers have got together to deliver a wide range of changes, such as fuel switching, energy efficiency, new industrial process and reskilling. Industries such as chemicals, cement and steel, where production processes chemically generate carbon dioxide,  need new investment in carbon capture technologies, where this can be seen to work.

Under present government structures, Local Enterprise Partnerships have an important role to play. They have a key role to play in coordinating businesses, attracting such government funds as are available, and investing in skills and training.

So, this year, a key goal is to work towards a new forum that brings unions, employers, local government and the LEPs, Universities and campaigning organisations together to develop a just transition strategy for the region.

The government’s 2050 Industrial Roadmaps indicate the kind of new technologies and process required: