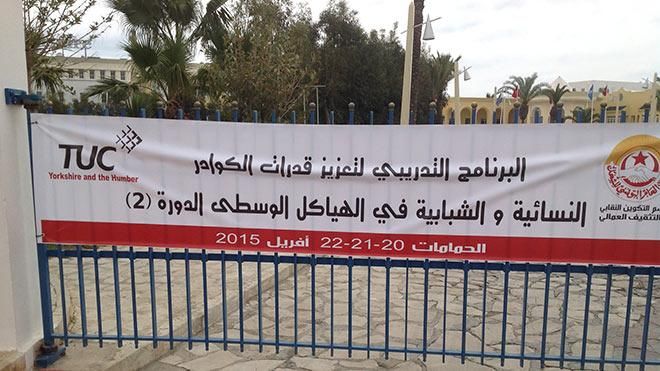 TUC Aid is helping to finance a training programme for women trade unionists in Tunisia through their trade union centre the UGTT. Aware of the lack of women representatives higher up in the UGTT, the organisation is taking affirmative action. Firstly, they are changing their rules to establish mandatory quotas for women in their structures. Secondly, they are offering development opportunities to enhance the capacities of women activists in the middle structures of the union to become leading figures in the movement and civil society.

It is part of this second initiative that TUC Aid is supporting. Which is taking the form of a series of three courses, each spread over 3 days.

The second of these training events touch place on April 20/21/22 in Hammamet, Tunisia. Over forty women from around Tunisia took part in the training which was also attended by delegates from the Yorkshire and Humber region of the TUC executive committee. Links between the UGTT and the region have been ongoing since 2007, including training for women and youth delegates.

The training looked at the legal status of Labour law, the organisation of the judicial process in Tunisia and its effect on workers’ rights in the public and private sectors, and the major differences between the different sectors.

The seminar also looked at the key economic issues and challenges in Tunisia during austerity and its effects particularly on women and young workers, and focused on Gender rights and differences in law and practice.

In between the different thematic discussions, time was taken to carry out practical exercises and how to problem solve from a trade union activists position. The UK delegates also took part in sharing experiences of standard practice in the UK especially on the equality and diversity policies adopted by UK unions.

The number of delegates and their appetite to learn and become more active in their sectors was completely refreshing. Despite many problems and current difficulties, the Tunisian comrades were steadfast in their aspirations to build a pluralistic secular society, enshrining equality for all and to underpin legal social and economic rights for all citizens regardless of gender, age, race or creed.

Our UK delegates were inspired by the seminar and we hope to invite some of the women delegates to Yorkshire to enhance their experience, maybe shadowing senior women representatives and leaders of trade unions in the UK.

The hospitality shown to us could only underpin the solidarity that exists between workers everywhere, and we are proud of our links and solidarity with our Tunisian sisters and brothers.

I'm sure the experience will have a long lasting effect on the UK delegates, and it was a very worthwhile and inspiring visit to a New Democratic country very much influenced by the work and commitment of huge numbers of members and the leaders of the UGTT.

Report by Bill Adams, TUC Regional Secretary for Yorkshire and the Humber