Welcome to this month’s Global Solidarity Update, bringing you updates about the work of TUC international team and news from labour struggles around the world.

Trade Unions Organising to Win Around the World

Register for this event 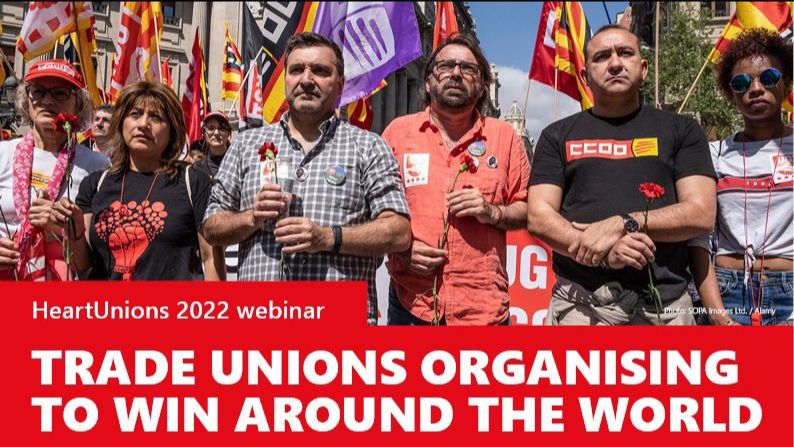 This online event will show how trade unions are organising to win major industrial and political victories around the world. Bringing together speakers from across the international trade union movement, we will showcase trade union wins in Spain, India, Chile, and the United States and share the lessons of how unions have organised to win for working people around the world.

Latest from the TUC International Team

Gulf States: The TUC has submitted evidence to the Department of International Trade consultation about trade talks with the Gulf Cooperation Council states opposing a trade deal due to widespread human and labour rights abuses taking place in Gulf states, including exploitation of migrant workers and systematic gender discrimination. Read the TUC submission.

India: As the UK government enters trade talks with India, the TUC has warned against any free trade agreement that fails to provide for the enforcement of human rights and labour standards. This intervention comes in the context of campaign against labour standards, social security, and workers’ organisations being conducted by the Modi government, and the TUC plans to work closely with trade unions in India over the coming months. Read coverage in The Morning Star.

Myanmar: The TUC marks the one-year anniversary of the coup in Myanmar by expressing our admiration for all democratic forces who have bravely resisted the military. We have called on the UK government to embargo all trade in arms and fossil fuels with the regime. The ITUC has launched a strike fund for democracy defenders in Myanmar and is requesting donations. Read the TUC statement. Donate to the strike fund.

Poland: The TUC has written to the Polish Ambassador to the UK to protest alleged Polish government plans for a smear campaign against the teachers’ union ZNP and the OPZZ union centre in 2019. The existence of the plan was recently revealed in documents leaked to the media from the top of the Polish government.

Spain: The Spanish government has signed into law a historic agreement with trade unions and employers to reintroduce sectoral collective bargaining. The deal marks the first progressive labour law reform since Spain returned to democracy. Read the TUC blog ‘Spain shows the way’

UK-EU Trade and Cooperation Agreement: The TUC has recently released a report explaining how the  Level Playing Field provisions in the UK-EU Trade and Cooperation Agreement can be used to protect workers’ rights. At the report launch meeting we were  joined by  Labour’s Shadow Secretary of State for International Trade, Nick Thomas-Symonds; the IPPR’s Marley Morris; and the report’s author, Professor Federico Ortino. Read coverage of the report from POLITICO. Read the full report. Read the report summary.

Report: The Challenge to Democracy in Brazil

Blog: Bolsonaro is waging a war on labour rights in Brazil

In the press: Why Colombia’s peace deal hangs in the balance

Report: The role of trade unions in international development cooperation

Blog: The freedom struggle in Eswatini

Labour struggles around the world

Argentina: Argentine finance minister Martín Guzmán has declared that the IMF risks losing ‘all legitimacy’ if it imposes conditionality which pushes the country deeper into crisis. From Buenos Aires Times.

Belarus: At its recent 11th congress, the Belorussian Congress of Democratic Trade Unions (BKDP) has declared readiness to enter in dialogue with state authorities. From the BKDP.

Brazil: On the third anniversary of the collapse of the Brumadinho mining damn, which took the lives of 270 people, Brazilian unions are campaigning for stricter environmental and safety regulations. From the Building and Wood Workers’ International.

Cambodia: International unions are campaigning for the release of imprisoned trade union leaders. From Labourstart/IUF.

Colombia: Baroness Christine Blower has raised TUC demands to suspend Colombia’s invitation to join the UK-Andean trade agreement in the House of Lords. From Hansard. From Justice for Colombia.

European Union: The ETUC has published research demonstrating that platform companies are failing to recognise the true status of their employees across much of the rest of Europe.  From UNI Global Union and the ETUC.

Iran: Teachers in Iran are engaged in a serious dispute in pay and conditions and demanding the release of jailed trade union leaders. From The Morning Star and Education International.

Germany: Climate activists have joined forces with IG Metall organised automotive workers in Germany to push back against climate change being used as cover for layoffs and offshoring. From Progressive International.

Indonesia: The Indonesian Trade Union Confederation (KSPI) has won a nationwide dispute to reject and inadequate minimum wage hike and won and increased offer. From IndustriAll.

Kazakhstan: Unions in Kazakhstan have blamed the recent political and social crisis on inequitable distribution of resources and are campaigning for a return to order in the framework of improved labour rights and protections. From the Building and Wood Workers' International and the ITUC.

Myanmar: IndustriAll has written a report of the violent conditions faced by trade unions in Myanmar under the junta. From IndustriAll

Palestine: In February 2020, the UN Human Rights Office published a database of 112 companies operating in illegal Israeli settlements on Palestinian land. Scores of settlements have been set up in Palestine in flagrant defiance of international law, and businesses operating inside them are essential to the illegal settlements’ continued existence. But two years on, no further action has been taken. The database has not been updated or kept current and the ITUC is petition the UN for action. Sign the ITUC petition.

South Africa: A spokesperson from COSATU has spoken to Equal Times about the implementation of ILO Convention 204 on formalising the informal economy. From Equal Times.

Tunisia: Public television workers have been on strike in protest over the non-renewal of collective bargaining agreements. From the ITUC.

Workers at the Farplas automotive parts factory have staged an occupation following victimisation of workers attempting to organise in a union. From SPOT.

United States of America: A second Starbucks outlet has won union recognition as part of a national organising campaign by employees of the corporation. Starbucks has been accused of hypocrisy for celebrating ‘MLK Day’ even while paying millions of dollars to union busting consultants to stop the unionisation drive. From The Morning Star and The Morning Star. Starbucks Workers United homepage.