Welcome to this month’s Global Solidarity Update, bringing you updates about the work of TUC international team and news from labour struggles around the world.

The TUC condemns the illegal invasion of a sovereign nation and calls for Russia to respect Ukrainian territorial integrity. We join the global union movement in calling for peace and urge all governments to reach a negotiated solution through diplomacy, including a return to the framework of the Minsk agreements, to bring about peace, democracy, security, and human and trade union rights for all in Europe, Ukraine and Russia.

On Tuesday 15 March 2022, the TUC convened a meeting for UK trade union leaders to hear from our sister centres in Ukraine, the KVPU and FPU.

The meeting also heard an address from Enver Solomon, Chief Executive of the Refugee Council, who stressed the lack of government action on waiving visas for Ukrainian refugees and the denial of access to housing benefits which would allow them to live independently once they arrive.

TUC General Council international spokesperson Kevin Courtney read a message from our Polish sister centre, OPZZ. We heard about their heroic efforts in aiding refugees as the Poland/Ukraine border, and we join them in condemning the viscous racism experienced by many attempting to cross to safety. Kevin also read out messages from Russian peace activists, including an open letter signed by over 5000 teachers, at great personal risk to themselves.

The meeting was also addressed by Frances O’Grady who affirmed the UK trade union movement’s position in favour of providing practical solidarity to refugees and pressuring our government towards greater humanitarian efforts and to support a rapid diplomatic path to a negotiated peace. 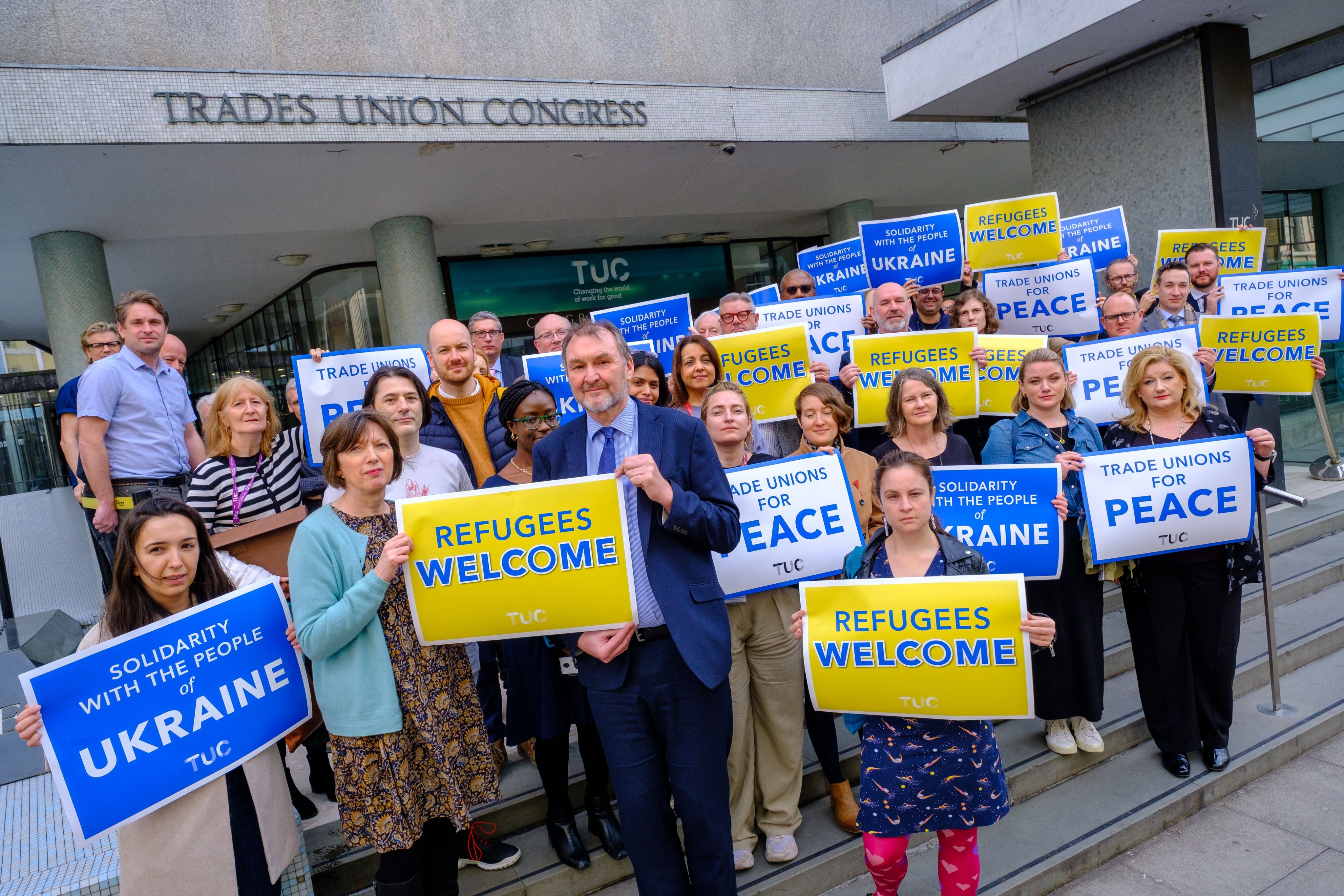 Following the event the TUC wrote to the UK government demanding more effort is made to support refugees coming to Britain. This followed a letter demanding action to pursue a diplomatic solution, fund humanitarian efforts, and offset any worsening of the cost-of-living crisis which may exacerbated by events in Ukraine.

Following the shocking sacking of 800 workers on P&O ferries, the TUC is supporting maritime unions to campaign for the reinstatement of the workers and to strengthen  employment law to prevent any further use of ‘fire and rehire’ tactics.

We ask that you sign and disseminate both this letter of protest to Sultan Ahmed bin Sulayem of Dubai, CEO of DP World, the owners of P&O Ferries, and this TUC petition. 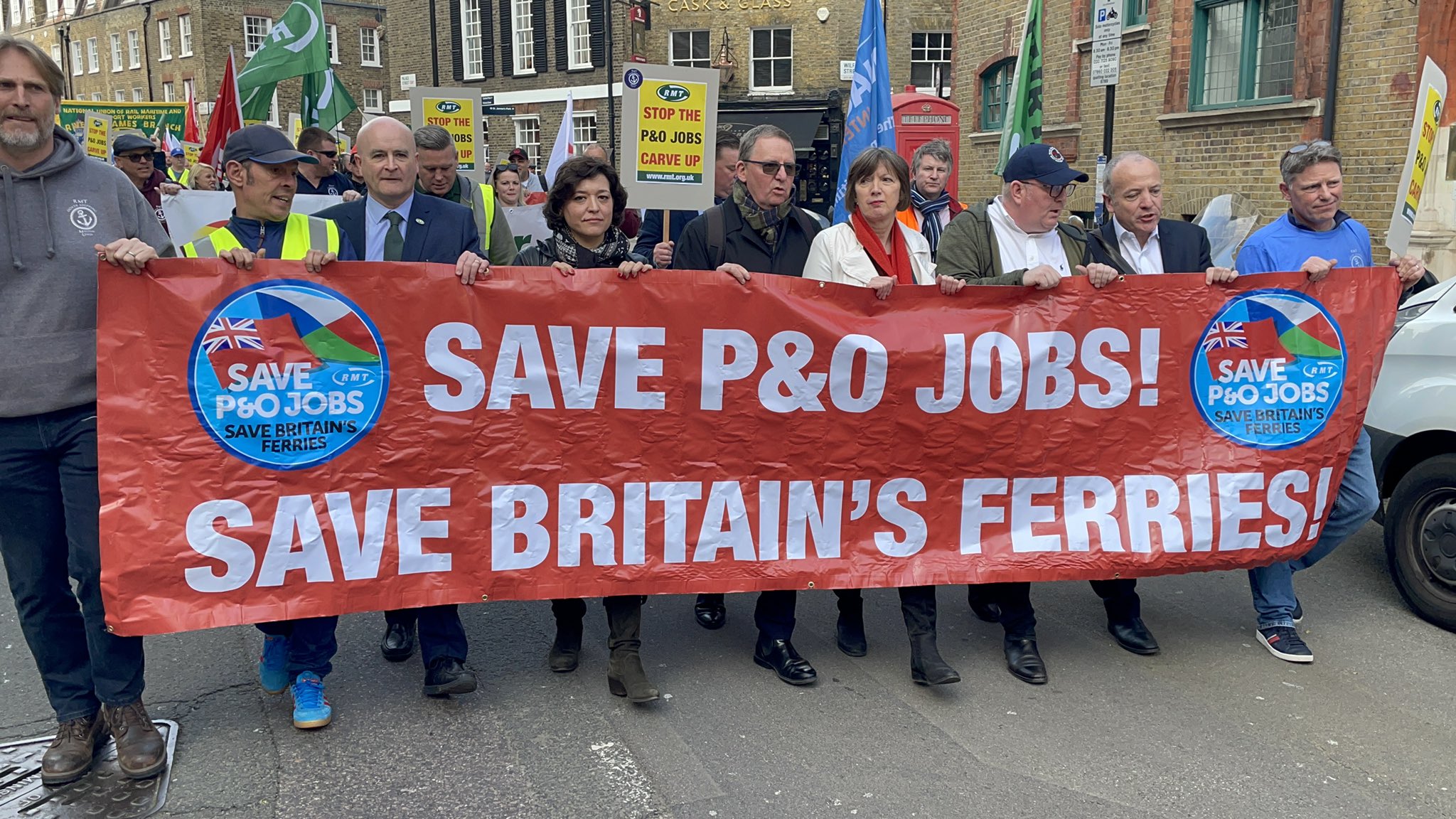 Latest from the TUC International Team

Palestine: Take action to end corporate complicity in the occupation of Palestine. From the TUC. From the ITUC.

Trade: ETUI event on the TUC level playing field report. From the ETUI.

Trade: The TUC provided evidence to MPs on the International Trade Committee on concerns with the UK-Australia trade deal. From Parliament Live TV.

The TUC Deputy General Secretary Paul Nowak attended a UK-US trade dialogue event in Baltimore on 21 March.  The event was organised to focus on the US government’s ‘worker-centred approach to trade’.  The TUC took part in roundtables with US Trade Ambassador Katherine Tai, the UK Secretary of State for international trade, AFLCIO and US trade unions. See tweet here.

Following the event, the UK and US governments issued a joint statement where they pledged to support ‘inclusive economic growth for workers and businesses’ and ensure that trade deals ‘strengthened protections for workers’ rights…tackle forced labour globally…[and] harness the benefits of an open and competitive digital economy, with appropriate safeguards for workers, consumers and businesses.’

The UK and US governments also agreed to end US tariffs on UK steel and aluminium imports which the UK and unions had been calling to be scrapped.

Statement: The one year anniversary of the coup in Myanmar

Labour struggles around the world

Algeria: Global unions are campaigning for the release of political prisoners and against the repression of free trade unions in Algeria. From the IUF. From PSI.

Australia: On Tuesday, 15th February 2022, nurses across the public health system in the state of New South Wales (NSW), Australia took strike action for the first time in a decade, demanding mandated nurse-to-patient ratios for each shift, a fair pay rise and a pandemic allowance. From PSI.

Brazil: Trade unions have signed a new Joint Declaration on Safe and Healthy Workplaces with the multinational company Faber-Castell in Brazil. The declaration covers 2,530 workers in the cities of Manaus, São Carlos and Prata. From the BWI.

Brazil: It has been revealed that infamous ‘Lavo Jato’ judge and presidential candidate Sergio Moro has received more than $8 million USD from companies he negotiated leniency agreements with during anti-corruption trials. From Brazil Wire.

Brazil: The Landless Workers’ Movement has joined the coalition of forces ready to oust Bolsonaro at in the forthcoming October elections. From Brazil Solidarity Initiative.

Cambodia: Three union leaders have been arrested following a strike a major casino hotel. From the IUF.

Canada: While supporting the right to protest, Canadian unions have firmly rejected far-right mobilisations in Ottawa. From the Canadian Labour Congress.

Colombia: Colombia has recently celebrated a historic victory for women’s rights with the decriminalisation of abortion. From The Guardian.

Colombia: Tony Lloyd, Labour MP and chair of the Parliamentary Friends of Colombia group, wrote for The Times on this month’s elections. From The Times.

Colombia: Unite the Union has written to the Colombian embassies in the UK and Ireland following the latest murder of a member of its partner, the FENSUAGRO rural workers union. José Euclides Gonzáles Marín is around the 40th FENSUAGRO trade unionist killed since the 2016 peace agreement. From Justice for Colombia.

Cuba: The NEU are continuing to work with the Cuba Solidarity Campaign and Cuban education unions to raise money for donations for education materials to Cuba. From Viva La Educación

Egypt: Public Services International have published an informative essay on the history of Egypt’s independent labour movement. From PSI.

Greece: On 26 February, three Greek unions organized a massive demonstration and march to the Greek Parliament in Syntagma Square to protest layoffs at Kavala Oil and other industrial sites. From Industriall.

Haiti: Protesting garment workers demanding a raise to the minimum wage have been met with police violence. From Industriall.

Hungary: Teaching unions have hit out at a decree they say effectively outlaws the right to strike, branding the move an unconstitutional abuse of law. From The Morning Star.

India: A major new investigation has revealed the extent of the use of big tech by the far-right BJP party to spread online hate. From Progressive International.

Italy: Trade union centre CGIL has released a video expressing its determination to stand up to fascism, following the far-right attack on its HQ last year. From Collettiva.

Myanmar: 55 UK MPs have backed the call to sanction the Burmese junta’s access to aviation fuel. From Burma Campaign UK.

Sri Lanka: Twelve unions across Sri Lanka have launched a joint campaign to demand a rise in the monthly minimum wage of private sector employees. From Industriall.

Turkey: The mass trial of opposition HDP politicians is ongoing, including a case currently with the national constitutional court to effectively ban the party. An indictment has requested the dissolution of HDP and banning of 451 party members, including HDP Co-Chairs Mithat Sancar and Pervin Buldan, from politics for 5 years. The words and actions of 69 party members are stated to be the main ground of the demand for closure of the political party.

Turkey: Deliveroo drivers have been organising in unions to beat skyrocketing inflation. From Progressive International.

Turkey: Croation unions have begun an organising campaign with Turkish migrant workers in the construction of a new mega railway project. From BWI.

United States of America: The US Department of Labor has launched a pro-trade union taskforce on worker organising. From the USDoL.

United States of America: Starbucks has fired an organising committee of 7 workers for attempting to form a union. From The Morning Star.

United States of America: The State of California is suing Tesla after claims of racial segregation and harassment at a large car plant. From the Guardian.