Want to hear about our latest events?
Sign up now to get it straight to your inbox 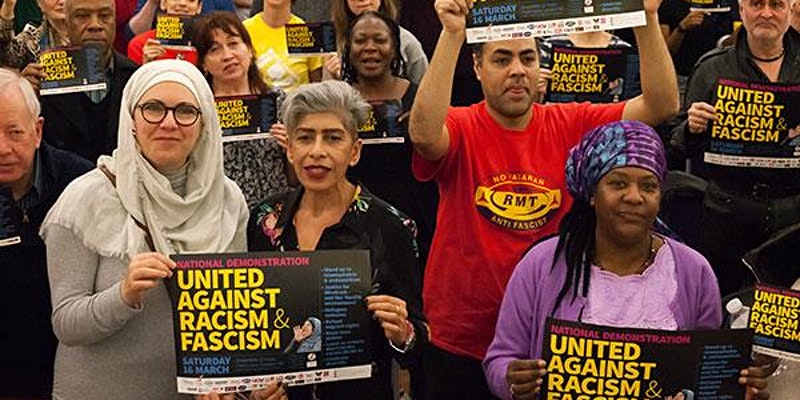 On Saturday, 5 February, trade unionists and workplace activists from across Britain will come together at the ‘Fighting for anti-racist workplaces’ online conference - hosted by the TUC and Stand Up To Racism - to talk about how we oppose the government’s racist offensive.

Boris Johnson and Priti Patel’s Nationality and Borders bill attempt to effectively remove the right to seek asylum in Britain while the scapegoating of refugees and migrants continues. The government’s CRED report denied the reality of institutional racism exposed by the Black Lives Matter movement, despite the massively disproportionate death rate amongst black front line workers and communities.

The government’s new police bill targets BLM activists and the Gypsie, Roma Traveller communities. It strengthens police powers despite the ongoing reality of black communities facing disproportionate use of stop and search and deaths in police contact.

The government is playing the game of divide and rule, attempting to fool working people that ‘others’ are to blame for the problems in our society.

This ‘divide and rule strategy legitimises racism and risks opening the door to the racist and fascist right.

We need to take up these arguments in our workplaces and build the unity needed to oppose racism and austerity.

The Conference will discuss how we do this and maximise the trade union turnout at UN antiracism day events initiated by Stand Up To Racism and supported by the TUC.

Want to hear about our latest events?
Sign up now to get it straight to your inbox

Related
Content
Campaigns
TUC Anti-Racism Taskforce
The Taskforce will lead the trade union movement’s renewed campaign against racism at work. It will engage with Black workers across the UK to hear about their experiences. And it will produce recommendations on tackling structural racism in the UK, in workplaces and in unions themselves.
Tackling the far right
Far-right extremism is on the rise, in workplaces, in our communities, and online. Unions and union reps can help tackle these issues by using solidarity, trust and by talking to people about their concerns.
More events
Webinar: Flexible working - know your rights
20 Jan 2022
Discrimination Law Conference 2022
28 Jan 2022
HeartUnions Rally
12 Feb 2022
HeartUnions: Every worker needs a union – organising call
14 Feb 2022
Join a union
Enable Two-Factor Authentication