Standing with workers everywhere for decent work and social justice

Millions of workers around the world are living in poverty. This is no accident. It’s a political choice that puts increasing corporate power above protecting workers’ rights, decent work and having universal access to free quality public services. We’re standing with workers in the Global South to demand an end to poverty and inequality, and for decent work to be put at the heart of development.
Our objectives

We’re calling on the UK government to:

Decent work for all is a global struggle

Our struggle for decent work and an end to poverty and inequality is a global struggle. The coronavirus pandemic has exposed historical structural inequalities with their negative impacts in the Global South on access to quality healthcare and other public services, on the ability of governments to protect jobs and livelihoods, and on access to social protection and vaccines. Together with trade unions in the Global South, we’re calling for decent work to be at the heart of development with workers having a say in policy making, to secure an inclusive and sustainable recovery. Decent work for all is key to achieving the UN’s Sustainable Development Goals. Building workers’ collective power globally will help reshape globalization so that it delivers in the interests of workers everywhere.

What are the issues?

Governments around the world have promoted neoliberal globalisation – increasing corporate wealth and power, and a race to the bottom on workers’ pay, terms and conditions. It can’t be right that the bottom half of the global population owned less that 1 per cent of all wealth in 2018, while the richest top 10 per cent owned 85 per cent. The share of wages as a proportion of national income fell in 91 out of 133 countries from 1995 to 2014, according to the ILO (2016).

Historical structural inequalities persist – disadvantaging low and middle-income countries. Rich countries still have more say in the global institutions that set the rules – like the International Monetary Fund (IMF), World Bank and World Trade Organisation (WTO). The Bank and Fund continue to promote a model of development that has weakened workers’ rights and promoted austerity.

Around the world, about 630 million workers still live in extreme or moderate poverty, and about two billion work informally – with few legal protections and little access to social security. Women are more disadvantaged – often overrepresented in sectors and jobs that are more precarious, valued less and that pay less. The gender wage gap stands on average at 23 per cent.

The pandemic has also exposed the flaws in social protection systems and highlighted the need to build resilient systems with universal access. This is why the TUC as part of the global trade union movement supports a Global Fund for Social Protection.

Universal access to gender-responsive public services that are publicly funded and delivered -   underpinned by decent work, is vital to ending poverty and inequality, tackling the pandemic and building an inclusive recovery. Yet, in 2018, at least 46 low-income countries spent a greater share of GDP on debt servicing than on healthcare systems. The Bank and Fund supported by the UK government, continue to promote privatisation of public services in the Global South despite evidence that this does not deliver in the interests of poorer people.

Although the IMF has supported debt relief for some countries affected by the pandemic, a more sustainable solution is needed. And at a time when many low and middle-income countries need more support, not less, the UK government has regressively cut aid from 0.7 per cent of national income to 0.5 per cent. UK aid should be targeted at reducing poverty and inequality and meeting the SDGs including decent work for all by 2030 (Goal 8) – with transparent outcomes and consistent trade union engagement. But we’re concerned that the government’s strategic shift in aid spending will increasingly focus on supporting national self-interests.

The loss in UK aid is combined with developing countries losing an estimated $50-200 billion a year due to activities like profit shifting by multinational companies in order to avoid paying tax. This too robs developing countries of much needed resources to invest in quality public services, infrastructure and decent job creation.

The inequitable access to coronavirus vaccines we are seeing mirrors structural global inequalities. But, the public good must prevail over the interests of big pharmaceutical corporations. We need free, transparent and universal access to vaccines, testing, and treatment (globally through WHO leadership and through WTO suspension of the agreement on intellectual property rights – TRIPS).

And, we are facing a climate crisis. According to the OECD, poor people and poor countries will bear the brunt of climate change. UNA-UK contends that climate change amplifies existing gender inequalities. No one should be left behind as countries transition to low-carbon economies, and social dialogue is key to ensuring a Just Transition.

Decent work sums up the aspirations of people in their working lives. It involves opportunities for work that is productive and delivers a fair income, security in the workplace and social protection for families, better prospects for personal development and social integration, freedom for people to express their concerns, organize and participate in the decisions that affect their lives and equality of opportunity and treatment for all women and men.

Campaign resources
In an interconnected world, coronavirus needs a coordinated global response
We need coordinated international action by governments and international institutions to support frontline workers, protect jobs, deliver social security for all, and boost the real economy when the recovery comes.
Sustainable development isn't just about jobs - it's about decent work for all
A self-congratulatory new government report glosses over the work of trade unions to support decent work around the globe.
President Mnangagwa: stop the repression of trade unionists in Zimbabwe
The TUC has written to the President of Zimbabwe Emmerson Dambudzo Mnangagwa to raise our concerns about the ongoing repression of trade unionists and workers
Other campaigns 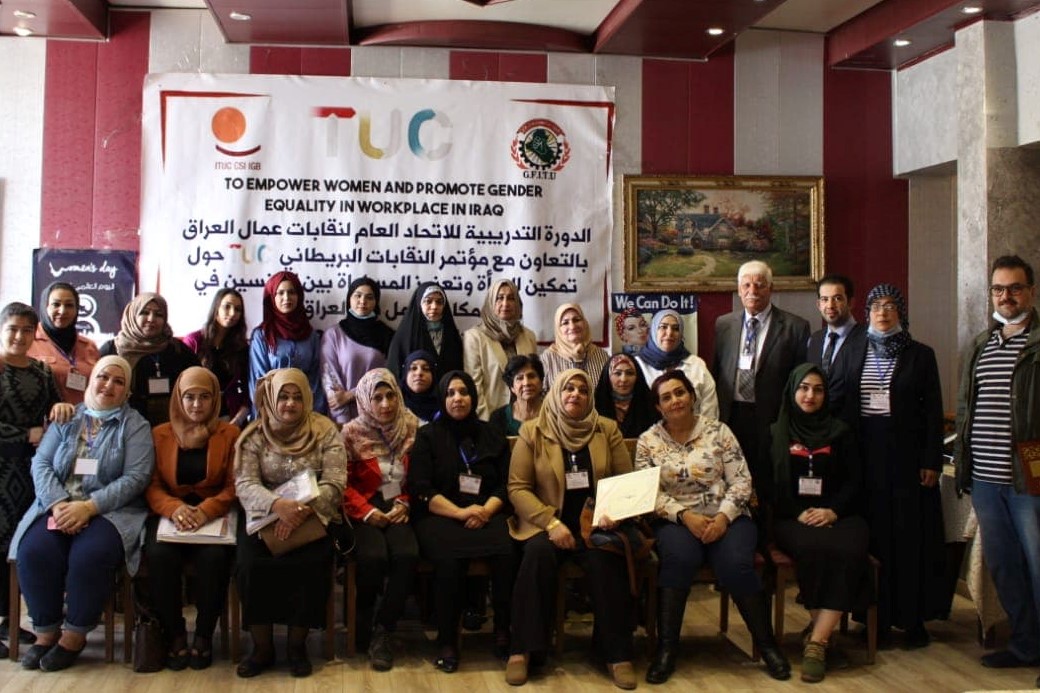 Promoting workers rights in trade deals
The TUC is working with trade unions across the world and through ITUC and ETUC to push for trade unions to be involved in trade negotiations and monitoring the impact of trade deals to ensure they promote workers’ rights, human rights, gender equality, Sustainable Development Goals, good jobs and redress inequalities between the Global North and Global South.
Join a union
Enable Two-Factor Authentication